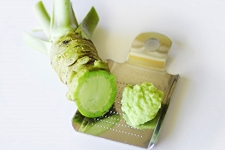 The asceticism of Japanese culture can be also seen in the Japanese cuisine. Selection of spices is not extensive, but the spices are delicate, exotic and brilliant in their simplicity. While the soy sauce adds pleasant aroma and salty taste, the capricious wasabi root brings piquancy into the Japanese cuisine.

However, more than 1300 years ago wasabi was known in Japan primarily as an medical plant. Wasabi stimulates digestion and blood circulation. It is scientifically proven to help in fighting gastric cancer. Wasabi has excellent antibacterial properties - the last and main reason why wasabi was historically used as an addition to raw fish and other seafood products. Wasabi root was grated on a special grater to achieve uniform wasabi paste. Historically shark skin was used as the surface of these graters, but nowadays a substitute material has been developed, which imitates the texture of shark skin. Wasabi paste is grated before serving, because in 10 minutes time it loses its spiciness and the nuances of flavour and aroma.

But why is wasabi the most capricious and expensive herb in the Japanese cuisine? Wasabi (wasabi japonica) is a light green root vegetable of Brassicaceae family. Because the wasabi is similar to the local horseradish both in taste and in visual appearance, it is sometimes called the “Japanese horseradish”. Horseradish is actually one and a half times more poignant then wasabi, but the spiciness of wasabi is more similar to the spiciness of mustard. Wasabi mainly grows in the mountains of Japan - starting from Hokaido in the north of Japan up to Hikimi and Shimane in the south of Japan. Wasabi is a very capricious plant, which is difficult to grow. It takes two and a half years to fully grow wasabi. It requires clear, flowing water, sufficient amount of sunlight, and suitable temperature. Due to these reasons wasabi is an expensive plant to grow. Wasabi can be found in the wild, but companies that grow it create special wasabi plantations which are fitted with all the necessary equipment to monitor the climatic conditions and provide the best growing conditions for the capricious plant.

Fresh wasabi root is very expensive. In Japan it can be purchased for 1000 - 2000 yens (7 - 10 EUR) per root. It is also difficult to store - in warm conditions or in excessive coldness the root loses its flavour properties. The Japanese themselves rarely buy fresh root. Average Japanese buys prepared wasabi paste in tube - just like we buy horseradish or mustard packed in jars. To keep the price of wasabi adequate and to be able to offer it to a wide range of customers, horseradish paste is added to the wasabi paste. Wasabi paste made in Japan matches lives up to its name, because it actually contains grated wasabi, but in the paste made by other countries the name only the name contains wasabi - not the actual ingredients. Such “wasabi pastes” usually are comparably cheap, and their main ingredient is just the horseradish.

In the Latvian market the brand “S&B Foods” is available, with guaranteed direct deliveries from Japan. “S&B Foods” in Japan are the pioneers of the manufacturing of spices. In 1972 the wasabi paste in the tube was introduce into the Japanese market, which was a truly revolutionary food product in the market at that time! This product has conquered also the Europe and has become especially popular during the recent years. Now it is possible to purchase not only wasabi powder and paste, but also various products with added wasabi: wasabi peas (green peas in wasabi coating), wasabi ice-cream, wasabi beer, wasabi mayonnaise, etc.

In Latvia wasabi is normally used with sashimi and sushi, but we recommend using it as a garnish to meat and fish dishes, adding a pleasant piquancy! Add wasabi to butter, mayonnaise, or create a piquant salad sauce - mix the wasabi paste together with Japanese soy sauce or olive oil.